There are 56 new residential buildings in downtown Seattle, and that’s just the beginning 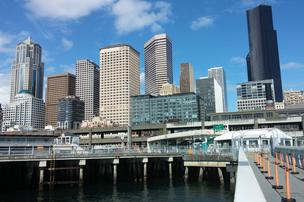 Overall job growth in downtown Seattle is twice that of the region as a whole: 243,995 Seattleites work downtown.

The Downtown Seattle Association presented its 2015 State of Downtown report Wednesday at an event heavily attended by public officials and business executives.

Scholes has a lot to live up to as the new head of the DSA after business favorite Kate Joncas departed to become deputy mayor last summer. Scholes’ plans to make downtown a safer, more accessible place to live and work received several rounds of applause Wednesday.

“Downtown has added approximately 25 new jobs each day,” he said.

The DSA considers “downtown” to be all neighborhoods from the waterfront to Capitol Hill and from Sodo to lower Queen Anne.

One of the most telling numbers from Wednesday’s presentation was downtown’s residential population increase.

Downtown’s permanent population has increased 8 percent since 2010 to 65,000 people. That number is expected to increase 10 percent more in five years. About 2,700 of those residents are children, a good sign that the population will continue increasing in the neighborhood.

The number of occupied apartments and condos has shot up even faster — there are now 12,000 condos and 33,000 apartment units in the neighborhood.

The organization is partnering with the city to increase public safety and tackle the homelessness issue that pervades downtown.

Here are five other key things to know from the 2015 State of Downtown Economic Report.

1. Downtown retail sales have increased 22 percent since 2009. “We know how fragile downtown retail is,” Scholes said. “You can lose your retail in a few years and it can take a few decades to get it back. We are determined that this will not happen here.”

3. Sixty-nine percent of downtown employees commute using public transit and other methods besides driving, up from 50 percent in 2000.

4. “Seattle is a city full of great designers and architects,” Scholes said. “You wouldn’t know that by peering outside at our sidewalks and parks at times.” The DSA is pushing initiatives to improve and update public spaces.

5. The overall job growth in downtown is twice that of the region as a whole: 243,995 Seattleites work downtown.